Explore the water around

Samuel Taylor Coleridge, The Rime of Ancient Mariner
Ganga in the Himalayas: Bhagirathi near Gangotri, Uttarakhand
The trek from Gangotri towards Gomukh, mouth of the Gangotri glacier which feeds Bhagirathi (a major tributary of Ganga) provides a great insight into runoff processes in Himalayas. The trek starts from Gangotri at ~3500 m elevation towards the mouth of Gangotri glacier at Gomukh at ~4000 m elevation, covering a distance of 18 Kms. The physical setting of the river until about halfway to Gomukh are shown here. Top panel: the river bed consists of stones of varying sizes. There are uprooted trees in the river bed (top panel, left) that probably got there after a major flood event. The river bed is much wider than the width of the flow path as these images are taken at the end of the dry summer season (summer being a relative term at 3500 m elevation). It is likely that the river expands to flow across the entire width during peak monsoon season. Water melts from snowy peaks to join the river when temperatures are high (middle panel, left image). Landslides are quite frequent and deliver huge quantities of sediments of all sizes to the river (middle panel, right image). On this particular day, the temperatures were nearing freezing and perhaps this small tributary is frozen. There is no clear riparian zone around the river, the mountain forests come right upto the river bank, which is typical of lower order streams (bottom panels). A vegetation gradient is visible: closer to the river bed the mountain slopes are hosts for trees, which transition to shrubs to barren soil as we move up. 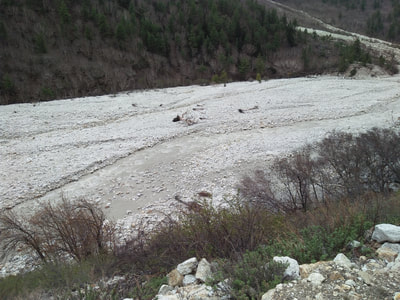 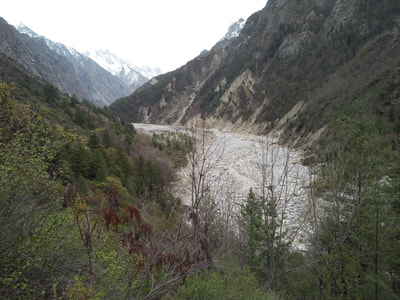 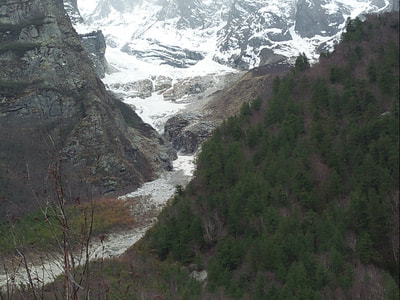 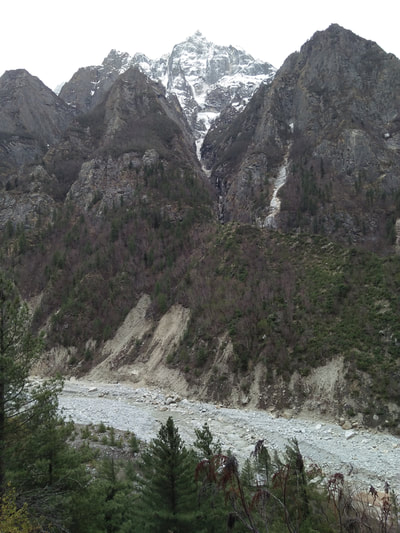 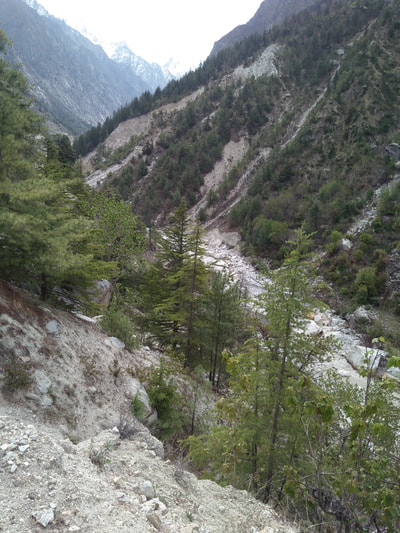 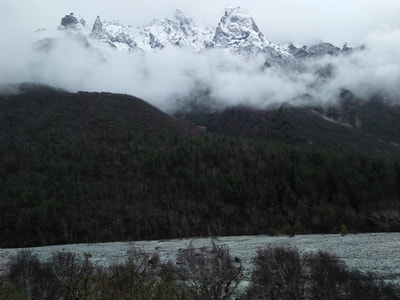 Pictures hardly do justice to the physical setting. The sounds of the flowing river fills the air.

Ancient Water Harvesting Systems in India (II): Kanheri Caves, Sanjay Gandhi National Park, Mumbai, India
Kanheri Caves are a great example of how people over 2000 years ago thought about water management. There are 100+ caves, carved out of hard rock into rocky outcrops atop mountains, which were otherwise covered by dense vegetation. As the caves are located near the mountain ridges, there are little to no streams around. Thus, almost all caves have a water storage unit as a part of their design. What struck me most though were drain like small carvings into the hard rock surfaces away from the main structures, that were everywhere. Following the path of each carving, I noticed that they lead to the water tanks. Basically, it was an attempt to capture as much rainfall as possible and divert it to the various storage structures.
Water storage units: two are shown in the left image, one in the middle image. The right image has four storage tanks in total on either side of the stairs. All storage tanks are located at the entrance of the caves. Inside view of some caves are shown below.
The most interesting part of this site were the rock cut channels. They are not hard to spot, and I saw at least one other visitor noticing this, and being very excited about it! (Left image) A rock cut channel leading to a storage tank. (Middle Image) Carving out the mountains: there are channels all around the rocky outcrops leading to water tanks in different caves or to the river channel nearby. (Right image) If you wonder how clean this water is, I took the picture of water in one of the tanks. The water is clean enough for the bottom of the tank to be visible. Good enough for 1st Century BCE?
Water in Japanese culture
Water is an essential part of Japanese culture.  There are small structures designed to allow water to fall in such a manner that the sound produced is extremely soothing.  Or, one can view temples placed at the edges of ponds, with gardens adorning the surroundings.  Japan is blessed with plenty of water and it has evolved to include its abundance in its culture. Images taken in June, 2015 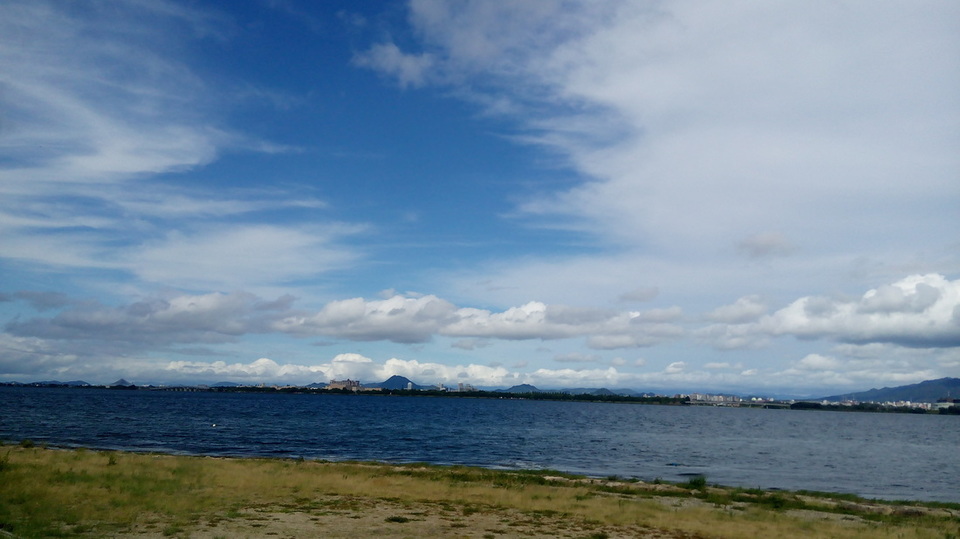 Lake Biwa near Otsu, Japan
It makes for an excellent hike and an intriguing ecological problem.  Lake Biwa supplies freshwater to a large urban population (including big cities like Kyoto and Osaka among others).  However, the lake itself has been struggling to cope with pollution load coming from surrounding areas (both from agricultural fields as well as urban areas).  It's setting poses a challenging but interesting ecological problem.  Lakes are generally classified as shallow or deep based on their physical setting.  This classification helps to identify suitable pollution management strategies.  But Lake Biwa is different - it is neither a shallow lake nor a deep lake ! It is both as part of it is shallow (maximum depth less than 10 m) surrounded by urban areas and the other part is deep (maximum depth more than 100 m).  The shallow part of the lake tends to be less resilient to pollution (bottom left image) and becomes eutrophic first.  But, this pollution is then carried over to the deeper parts of the lake by water currents. Images captured in June, 2015. 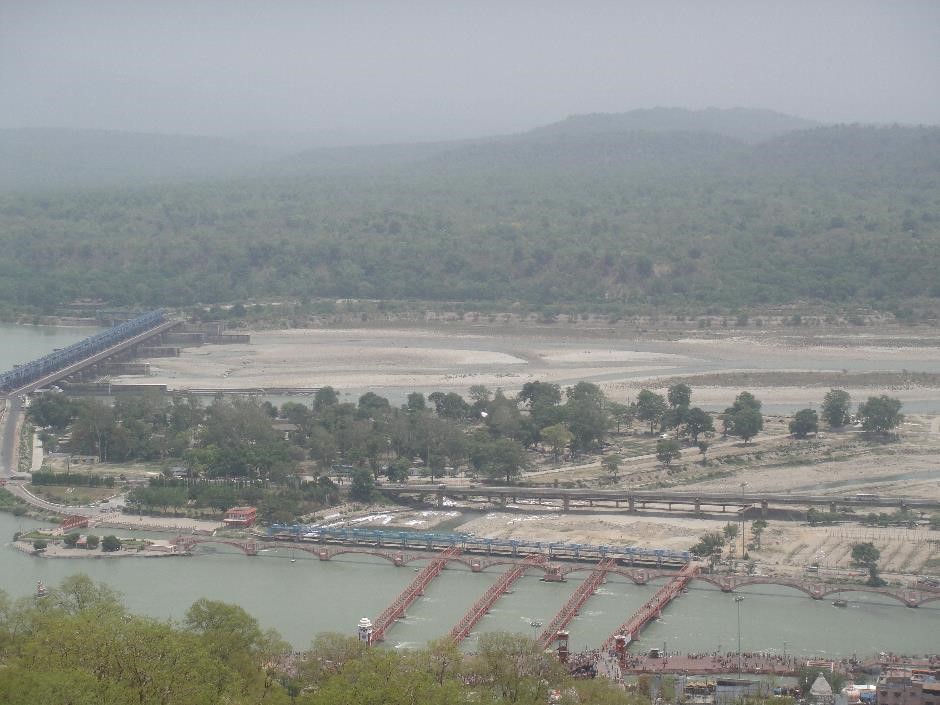 Ganga at Haridwar, India
This is a panoramic view of the Ganga river at Haridwar. The river flows down from the Himalayan mountains towards the Bay of Bengal. It is at Haridwar that the river meets the Gangetic plains after flowing through rough Himalayan terrain.  I found this view amazing as it shows the hydraulic control on the river quite clearly. The barrage (middle left) diverts water from the main river to the Ganga irrigation canal (bottom). Needless so say, one is captivated by the enormity of the river itself. The word Haridwar literally means 'the door to the Lord'. Photo taken in June, 2012
Ancient Water Harvesting Systems in India (I): Temple of Ram at Nagpur, India
Before the dawn of the piped water supply, many parts of India relied on indigenous methods of water management. Central to these methods was a storage unit generally targeted towards meeting the needs of a group (a palace complex or a small town). (Left) A typical storage tank (not used anymore) in the temple complex of Ramtek, Nagpur. It is likely that most of the water for the temple complex was managed through this tank. The stairs might have been used for accessing water, cleaning the tank, or bathing. I have doubts about the last one if this was a drinking water source. (Right) I found this strange water structure a few meters away from the tank at a lower elevation but could not discern its use. Photos taken in March, 2015
All photos taken by Riddhi Singh unless otherwise specified.